Escape Authors by the Stereotypical Librarian

While you are waiting for the new highly popular titles to become available here are some of my new escape authors to try:

Mark Greaney is not a new author.  Greaney has been writing his Gray Man CIA assassin series since 2009.   We also have books by him that he wrote with Tom Clancy.  Greaney’s thrillers are great escapes as they are action packed and take you to international destinations.  I just finished reading Gunmetal Gray which is the sixth book in the Gray Man series.  This book took me to Vietnam and as we (The Gray Man and myself) were slogging through a flooded rice paddy with water up to our shoulders with mosquitoes and snakes all around I realized there are far worse places to be than shut up in your cozy house in Montana.  Gunmetal Gray reads like an action movie with suspense, danger, and humor.  No I didn’t read the series in order and I don’t think you will have to read them in order to be able to enjoy them.  We have the latest titles in the series Mission Critical and the book published this year which is 9th in the series One Minute Out.  A feature film adaptation of the Gray Man is in development by New Regency Pictures.

John Galligan with his latest book titled Bad Axe County set in rural Wisconsin and features the first female sheriff of that county, as she searches for a missing girl, battles local drug dealers, and seeks the truth about the death of her parents twenty years ago.  She is just the interim sheriff with the last day to file to run for the office being tomorrow.  Half the county wants her elected but the other half will do anything to keep her out of law enforcement.  They all seem to be out to get her tonight as a storm rages and she wonders does she even want the job.  Bad Axe County is a book that is action packed and the next installment will be coming out in August 2020.

Simone St. James’ new stand alone book is The Sun Down Motel.  Carly Kirk has never been able to forget the story of her aunt Viv, who in 1982 disappeared from the Sun Down Motel and was never seen again.  Carly decides to move to Fell, New York and visit that motel, where she quickly learns nothing much has changed.  She gets the same job Viv had and creepy events ensue, will history repeat or will she get to the bottom of this mystery?  It will keep you guessing.

Tessa Wegert has her first novel titled Death in the Family.  A storm struck island, a blood soaked bed, and a missing man confront Senior Investigator Shana Merchant.  As Shana interviews the family we the readers get to wonder which one did it and why.  I’m still reading this one so I don’t know but I’m guessing right along with Shana.  A good old fashion who done it.

To see some of the new books we have added:  www.lewistownlibrary.org click on Find Books. Click on search card catalog.

On the first page that is displayed you will see a slider showing the newest items. 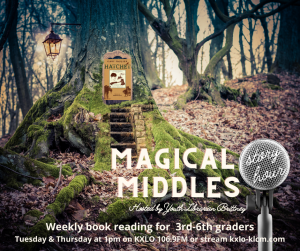 Magical Middles Story Hour on the airwaves!   Youth Librarian Brittney will be reading “Hatchet” by Gary Paulsen.  Magical Middles is a regular weekly radio program. Tune in to KXLO 106.9 FM on Tuesday and Thursday…
View Calendar