The Slater Block by Nancy Watts

Kari Denison October 23, 2018
The Slater Block was located at 409 W. Main (TV Appliance). It was designed by Wasmansdorff and Eastman and built in 1914 by Piper Construction Co.

Christopher Slater came with his sons, Christopher John (father of Harold Slater), Henry N., and William A. Slater, to Lewistown around 1904 and opened the Palace Meat Market at 407 W. Main. In 1909, C.E. Richards built the Richards Building on this spot and the Slaters moved their business into the first floor of this building. “At the regular weekly meeting of the city Council held last night a permit was granted to Charles Richards for the construction of a modern fireproof business block three stories above the basement on the site now occupied by the Slater butcher shop.” (Fergus County Democrat Jul 18, 1911).

The Slaters later bought the land next to the Richards building, “A long-pending deal was closed up at the end of the week when Slater Brothers bought the Louis Landt site adjoining the new Richards building on Main Street having a frontage of 50 feet for $22,500. Slater brothers intend to shortly wreck the handsome building on this site which will close up the gap between the Richard’s Building and the Lang block.” (Fergus County Democrat, Jun 17, 1913).

“Wasmansdorff and Eastman today practically completed the plans for the four-story business block to be erected by Slater brothers on the fine site recently purchased by them from Louis Landt between the Richard’s building and the Fad [Lang Building]. The structure will be four stories and the material to be used will be the best quality of Lewistown brick. It will be strictly modern and will cost around $40,000 when fully completed. Bids will soon be called for and the intention is to have the block completed this year.” (Fergus County Democrat, July 8, 1913).

“….the new [Slater] building will be devoted to hotel purposes, the upper floors being intended for apartments, with a café on the ground floor. The structure will cost about $50,000 exclusive of the site, which Slater Bros purchased last year from Louis Landt.” (Fergus County Democrat May 5, 1914).

“The contract was yesterday awarded to the Piper Construction Company for the erection of the Slater Block on Main Street between the Land [Lang] Building and the Richards block. This will be a fine modern three-story structure the ground floor being leased to J. B. Ritch for his Myrtle Theater, while the upper floors will be used for apartments. The foundation has been completed sometime. The general contract let yesterday is exclusive of the plumbing, heating, etc. and the bid of the successful firm being just under $20,000.” (Fergus County Democrat, July 23, 1914).

“It is almost a certainty now that the Myrtle Theater will open Saturday night of this week. The seats are all in place now, the electric and heating connections made, …the famous film, “The Nightingale” which will be the picture which will open the house, is said to be one of the most satisfactory bits of motion picture drama ever produced, and Ethel Barrymore, who plays it, needs no more than a mention of her name. The picture will certainly be presented with a very charming setting as far as a show house is concerned.” Fergus Co. Democrat, Nov. 14, 1914). 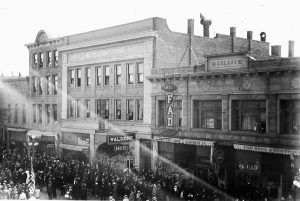 The Slater Block is largest building in the center of the photo. The Richards building (with the curve on top) is left of the Slater Block and the Lang Building is to the right. 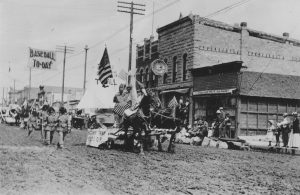 Slater’s Palace Meat Market is the short building on the right which is where the Richards building was constructed.