Underdog, or am I just being catty?  by the Stereotypical Librarian 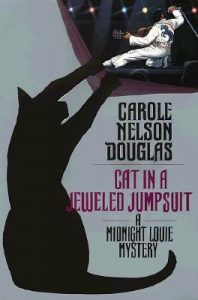 A new scientific study found dogs have twice as many neurons in their brains as cats have in theirs.  The human scientists who also display a large number of neurons in their brains concluded this must mean dogs are definitely twice as smart as cats.  My cats heard this report on the news and just rolled their eyes hissing something about fake news and where will it end.  It is time to head out to the back yard with our inferior brains and a large selection of books to read.  Okay, so my cat kids don’t actually read the books but they do enjoy sitting outside on the lawn furniture watching me read.  Here is what we have been reading perhaps you will enjoy it too.

The art of racing in the rain by Garth Stein is told by Enzo the dog who has grave concerns about his human family.  Enzo has learned what he knows from watching television and he is a philosopher.  Very profound.

The astonishing thing by Sandi Ward in her debut novel Boo a young cat tells the story as she watches her family of humans fall apart.  Boo learns much about the human condition and you will too.  Sweet.

Dog on it by Spencer Quinn you meet Chet a dog who flunked out of police school but is still smarter than Bernie the private investigator who is his owner and partner in solving the case.  Good mystery and great fun.

Cat in a jeweled jumpsuit by Carole Nelson Douglas is set in Las Vegas where an Elvis Presley theme park is getting ready to open.  There’s a whole lot shakin’ and even more Elvises in town for the grand opening maybe even the real Elvis will show up disguised as an imitator. When an Elvis ends up dead only Midnight Louie a jet black feline sleuth can solve this mystery.  Just part of a series about Midnight Louie, read them all.

The cat who could read backwards by Lilian Jackson Braun invented the cat solving the mystery genre in 1966 with this book we and Jim Qwilleran an out of work journalist first meet Koko the brilliant Siamese.  It is the cat’s Yow!

Lawyer for the dog by Lee Robinson tells about Sherman a miniature schnauzer who is caught in the legal system because his humans are divorcing and both want him.  After reading that one you will want to read Lawyer for the cat when Beatrice, a black cat who’s the beneficiary of a multi-million dollar trust and a plantation really needs legal help.  Fun legal advice.

If you still think those scientists were correct try reading A street cat named Bob by James Bowen and then watch the movie of the same name where Bob portrays himself, they had to hire a professional actor to play James.  Bob is 10 times smarter than any dog and about 100 times smarter than any of the people I know.  Case Closed.