The Stafford Building by Nancy Watts 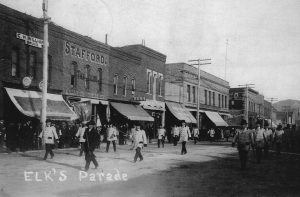 The Stafford Building at 316 W. Main was built in 1891 by George M. Stafford. George Stafford started his harness and saddlery business in 1886 in Lewistown. He was the Fergus County Surveyor and owned many lots in Lewistown (The Stafford Addition). He was married to Allis Watson.

His first building at that address burned early in February, 1891 along with 4 other buildings nearby. “Those who also lost businesses in the fire were Norman Brothers, Hanson & Powell, O. E. Bennett, A. Branson, John Gilkerson, T. R. Carson, G. W. Norman and Ed Gilke.” (First One Hundred Years, by Roberta Donovan).

“Mr. Stafford will rebuild at once. He thinks of putting up a stone building.” (Fergus County Argus, Feb. 5, 1891)

“Mr. Stafford’s decision to build of stone will no doubt be followed by others who were burned out in the recent fire. There is no reason why quarries should not be opened up and stone furnished as cheap as lumber…All business houses that are erected in the future should be built of stone or brick…G.M. Stafford our popular saddler and harness maker has decided to rebuild immediately. He intends to put up a stone building 25X60 with walls two feet thick. The roof will be flat and covered with tin. The windows will be provided with iron shutters and the building made absolutely fire-proof. Laux Bros. have the contract for stone work. D.J. Kane will superintend the wood work.” (Fergus County Argus, Feb 12, 1891)

“G.M. Stafford expects to move into his new building the first of next week.” (Fergus County Argus, July 16, 1891)