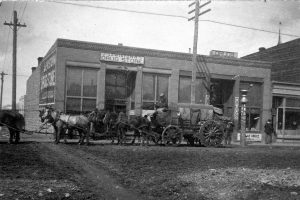 The Lewistown Drug Store was located at 324 W. Main on the corner of Main and 4th Ave. North (H & R Block). It is one of the oldest buildings in Lewistown, being built in 1885. The ad for the drug store on Aug. 18, 1887 stated: “the only drug store in Judith Basin; drugs, chemicals, patent medicines, fancy goods, toilet articles , full line of stationery; we make a special inducement in childrens’ toys, playing cards, croquet sets, fishing tackle, the leading periodicals of the day received weekly. Imported and domestic cigars. Norman and Hanson (local Dr.), owners. (Fergus County Argus).

On the right side of the building was “The Fair” which sold notions with Will W. White as the proprietor. In July 23, 1912 “Jack Watt and  Chauncey Fowler opened their new place, the Alta, for business, already have a good assortment of newspapers, magazines, candies, nuts, etc.,… They are occupying the building recently occupied by The Fair.” (July 23, 1912 Fergus County Democrat). In 1914, Fritz Race bought Fowler’s half interest in the Alta Store.

In 1908 the Gilt Edge Stage Line owned by James A. Harris had its office in the back of the building. It went daily to Gilt Edge and a round-trip ticket was $2.50.