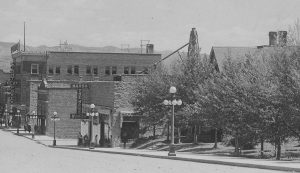 The Fitzpatrick Building (Creel Furniture) at 603 W. Main was built in 1913 by Frank Pierce. Link and Haire were the Architects. The original owner was J.B. Fitzpatrick from Great Falls.

“J.B. Fitzpatrick of Great Falls bought the Mrs. Mary Weistaner property, consisting of four lots, two facing Main Street with a frontage of 100 feet on that thoroughfare and having a frontage of 90 feet on 6th Ave; and two lots immediately back of them facing on Janeaux Street. The approximate cost was $25,000. …the Main Street lots were formerly the site of the Shaules Hotel [American House Hotel] which was destroyed by fire [Dec 10, 1902]. Mr. Fitzpatrick plans to improve the property immediately. He already has tenants for the building he is going to erect and plans will soon be completed for a handsome structure.” (Fergus Co. Democrat, June 24, 1913).

“J.B. Fitzpatrick asked that the alley in the rear of the corner of Sixth Avenue and Main Street, where he is erecting a business block be cut down to permit team traffic. (Fergus Co. Democrat, August 26, 1913).

“The Fitzpatrick block, Main Street and Sixth Ave. to be occupied by the Lewistown Furniture Co., and George Creel…This large store building is of stone, with plate glass front, and will soon be ready for occupancy.” (Fergus Co. Democrat Dec.16, 1913 Christmas Edition).

The Lewistown Furniture Co (Marsh the Homemaker) originally located at 109 5th Ave South, had a big sale: “Consternation Sale, January 1st we will be located in the splendid new Fitzpatrick building, The Magnificent $30,000 stock of furniture at sacrifice sale without reserve” “obey the impulse, do it now” (Fergus Co. Democrat Dec 2, 1913).

“The Creel Undertaking Co. have removed to their new quarters in the Fitzpatrick building at the corner of 6th and Main… The basement is well fitted up and used as a stock and display room.” (Fergus Co. Democrat Feb 3, 1914) Mr. Creel’s business had been in the Imislund Building at 508 W. Main.

“Marsh the Homemaker, has made a real home within the doors of his furniture establishment. In one end of the second floor and directly at the head of the stair he has built a bungalow, not a miniature one, but a life sized house.” (Fergus Co. Democrat, Jun 17, 1914). They then had a contest to give a name to the miniature house and the winner would win a rocking chair.