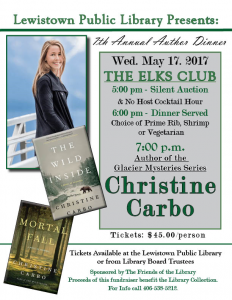 The Lewistown Public Library is pleased to announce Christine Carbo as the author speaker for the 2017 Annual Author Dinner. Carbo is a suspense author writing with Montana as the setting. Her debut novel, The Wild Inside, is an award-winning haunting crime novel set in Glacier National Park about a man who finds himself at odds with the dark heart of the wild—and the even darker heart of human nature. Publisher’s Weekly says “Evocative debut….Carbo paints a moving picture of complex, flawed people fighting to make their way in a wilderness where little is black or white.”  Her second novel, Mortal Fall, also takes place in Glacier Park where a wildlife biologist’s shocking death leads to chilling discoveries about a home for troubled teens. The New York Journal of Books writes, “Carbo doesn’t do superficial. She gives her characters weight. And like her debut, Mortal Fall provides a story with dual tracks—the investigation into murder and the rugged journey of the soul.”

As intriguing and alluring as bestselling crime novels by C.J. Box, Louise Penny, and William Kent Krueger, as atmospheric and evocative as the nature writing of John Krakauer and Cheryl Strayed, Carbo writes about the perilous, unforgiving intersection between man and nature. Her third book in the Glacier Park series, The Weight of Night, will be released in June 2017.

Carbo grew up in Gainesville, Florida then moved to Kalispell, Montana when she was twelve. At first, she hated leaving her friends and the beaches of Florida, but after a few months of living in the Flathead Valley, which is surrounded by beautiful lakes, mountains, wildlife and a ski resort, she quickly came to love the area. After high school, she attended college at Pacific Lutheran University (PLU) in Tacoma, Washington. Carbo got a private pilot’s license and decided to go to Embry Riddle Aeronautical University in Prescott, Arizona. While she was there, she realized she was more interested in the literature and humanities classes she was taking, so she decided to major in Communication Arts and finish her undergraduate degree where she started, at PLU.

Carbo returned to the University of Montana in Missoula and received a Master’s in English/Linguistics. After, she began teaching English courses at Flathead Valley Community College in her hometown of Kalispell.

Remembering her earlier years spent with family in Glacier and living close to the park again, Carbo fell back in love with it and spent most of her free time exploring there. Along with getting married and starting a family, she also began writing creatively and wrote two non-genre novels and by the time she was ready to do something with them, she went through a divorce and became a single mom and put them away. Teaching as an adjunct at the community college was not enough income for a single mom, so she began to supplement it by doing technical writing part-time and eventually, full time, which left little time to write creatively. She put novel writing aside for the better part of a decade. When she wasn’t working on technical documents, she was raising her son and for the benefit of her physical well-being, she became involved in Pilates. Ultimately, breaking away from technical writing and opening her own Pilates studio afforded her the flexibility to write creatively again. She remarried, continued running her studio and finally, pursued her passion to write. Carbo and her husband, Jamie, live in Whitefish with three kids, one dog and a cat. When Carbo is not teaching Pilates or writing suspense, she’s enjoying all that living in Northwest Montana has to offer.

The 7th Annual Author Dinner will be Wednesday, May 17, 2017 at 5 p.m. The event will be held at the Elk’s Club and will feature a silent auction, a delicious dinner, and time to visit with Christine Carbo. This event is a fundraiser for the Lewistown Public Library and all proceeds will go towards the Library’s book collection. Tickets are on sale now and available at the Library or from any Library Board Trustee. The event is sponsored by the Friends of the Library and the Library Board of Trustees. For more information please go to www.lewistownlibrary.org or call 538-5212.