You Can Go Your Own Way By KellyAnne Terry, Director 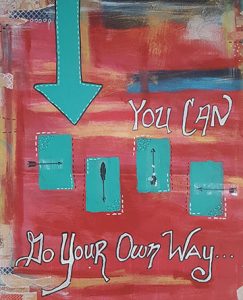 Each one of us walks a different path in this world, with no two the same. I see spring as the time to try a new path. In my book picks this week, I look at a variety of journeys, by land, sea and the aspect of the human mind. These voyagers may be on different paths, but they all have a good story for getting from here to there.

Sometime in 1925, British explorer Percy Fawcett walked into the Amazon jungle in Southern Brazil and vanished. Author David Grann sets out to find the answer in his book The Lost City of Z by giving a look at Fawcett’s life and, based on his own journey to the Amazon, his death. A very interesting read about a man whose curiosity could have been, ultimately, the end of the road.

Two shipwreck stories also make my list, and they both involve animals – who doesn’t need a sidekick on their journey? Yann Martel’s Life of Pi went from bestseller to a major motion picture with the story of a boy lost at sea in a boat with a 450 pound Bengal tiger. But when he’s rescued, is Pi’s outlandish tale the truth? My second book involves a horse, and it was also a book that went on to be one of the most beloved movies I ever watched as a child – The Black Stallion by Walter Farley. Once again, a boy is lost at sea but washes up on a desert island with a wild horse from the ship. Of course, adventures and friendship abound.

Switching gears, let’s look at a recent release on the course of information and learning. Dr. Daniel J. Siegel writes of the many mysteries of the human mind and how it relates to our identity and well-being. Bringing in different personal and scientific aspects, Mind: A Journey to the Heart of Being Human allows us a glimpse into who we are by a route we cannot see.

Finally, let’s look at those creatures who take a voyage every day, and tend to rack up a lot of air miles on vacations – birds! The library just got in this beautiful book titled Birds: Myth, Lore and Legend by Rachel Warren Chadd. Why do we say that storks deliver babies? Or, did you know the Mayans saw a hummingbird as the sun in disguise? The title alone should intrigue you, and with beautiful pictures and interesting history this will be the trivia book you can impress your friends with.

Going to the library itself can be an expedition, and with all those books on journeys, you never know which path you will end up taking.