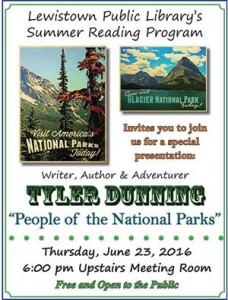 Bozeman blogger, adventurer and writer will be talking about the “People of the National Parks” in this program. Who were the people that influenced the creation of the National Parks? Adults are also welcome. Join us Thursday, June 23rd at 6:00 pm at the Library Meeting Room.

She would tell him everything, her prince charming. She told the whole story: an abusive stepmother, the humble huntsman, seven dwarves, a bewitched apple, the years of slumber. But she never confessed the dreams.

It was foolish and naïve to trust that the curse was ever even about sleep—this was a vast underestimation of the witch. But for those who didn’t eat the apple, the sleep was really all they saw: a pristine princess entombed in glass, resting peacefully through the lament of the observers. But as we all know, tales are told in our dreams, grand adventures orchestrated. And with a slumber that deep, entire lives could be lived. Entire lives could be lost.

When asked what it was like to sleep that long she would lie. She would equate it to a coma, to nothingness, to a void. She didn’t want to tell anyone about her other life, the one buried deep inside her psyche. She didn’t want to confide that in the subconscious space between this life and the next resided a heaven of her own construction.

It was there, in her heaven, that she had had a wonderful childhood spent with loving parents—no stepmothers, no abuse, no witches. It was there that she wasn’t relegated to an object of nothing more than feminine beauty—where she wasn’t expected to reflect the full spectrum of a young woman’s development. There were no sloppy dwarves to clean up after, no huntsman to protect her innocence, no prince charming to rescue and claim her with a kiss. In this heaven there were no cycles of jealousy, expulsion, adoption, renewed jealousy, death, and rebirth.

It was there where she met her first love, married, lost her virginity, and raised four children. While everyone watched her sleep, she was living a perfect dream life—white as the driven snow.

But this was all until the prince kissed her, reuniting the body and soul. The wicked stepmother, of course, knew this would happen—you don’t create a curse with a blatant loophole by mistake. The stepmother knew the greatest punishment and torment of all would be to wake up—waking to the nightmare of losing everything you had ever loved.

In time, the princess grew to appreciate her new life, a secret widow learning to love again. But despite this new-found happiness, she still went to bed every night eating an apple, hoping, praying, that this one was poisoned.

[Author & Storyteller based in Belgrade, Montana. Check out Tyler’s work at www.tylerdunning.com]