The Montana Building by Nancy Watts 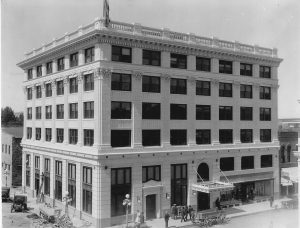 The Montana Building was built in 1916 at 222-224 W. Main (now First Bank) by the Sound Construction Company of Seattle. Link and Haire were the architects. The original Montana Hardware store, built in 1892, was located on this site until it burned down in 1915.

“The contractors are only waiting now to assemble their materials before beginning actual work on the new Montana building to be erected at the corner of Main Street and Third Avenue by the Bank of Fergus County, the Montana Hardware Company, the Cook-Reynolds Company, and the Lewistown Commercial Company.

The new building will be as handsome both inside and out and as substantial as any in Montana. It will be modeled in many respects after the new Securities building in Seattle…The projected structure will be six stories with full basement 90 x 100 feet it will be absolutely fireproof with framework of steel and concrete. The roof will be of tar and gravel covered with glaze tiling. The exterior will be of white terra-cotta. While all precautions will be observed toward making the building fire-proof and sanitary, the interior finish will also be extremely beautiful. The main entrance and corridor will be of white marble and the elevator door therein will be made of ornamental bronze. The corridors above will have floors of Terrazzo marble. The walls of the corridors will be constructed of hollow tile and the partitions between the rooms of gypsum partition blocks, which will afford absolutely soundproof enclosures.

There will be two elevators, electrically operated at a speed of 360 ft. per minute. …the staircase leading from one floor to another will be entirely enclosed and separate unto themselves, greatly minimizing any fire danger. The most approved modern heating, ventilating and vacuum systems will be installed in the basement and every feature of the toilet rooms will be ultra- sanitary each fixture being set well off the floors and apart from the walls. The same will be true of the radiators, so that no dust or dirt may accumulate underneath nor behind them.

There will be 68 major partitions in the building making about 80 offices. The Bank of Fergus County will occupy one part of the main floor and the Montana Hardware Company the other. Each will have its own street entrance…with all conditions favorable this building will be completed by June 1, 1917.” (Fergus Co. (Fergus Co. Democrat, Jun 22, 1916).

“The work of razing the Montana Hardware company’s block at the corner of Main and Third Avenue is being carried forward rapidly by Stanton and Smith and the walls will soon be entirely down and the whole site cleared for the beginning of construction on the six-story Montana Building.” (Fergus County Democrat, July 13, 1916).

“It is something new here to see construction work going on by electric light, but that is the way the contractors are rushing things on the big Montana Building where the men were last night pouring concrete under the arc lights strung across the immense excavation.” (Fergus County Democrat, Aug. 10, 1916).

“A huge celebration was held on Saturday Aug 25, 1917 to celebrate the opening of the bank and the Montana Building, with an orchestra playing in the bank. It also included and unusual event—dancing on the roof of the six story building until midnight with a 10-piece orchestra playing. The roof was decorated to represent a roof garden.” (Mary Criswell May 2, 1999 in Fergus County Argus).