The Bank-Electric Building by Nancy Watts

Kari Denison November 12, 2018
Bank-Electric Building at 501 W. Main was built in 1913. It was designed by Wasmansdorff and Eastman and built by Serrie Bros of Billings. The former building on the lot was the Lewistown Furniture Store (formerly the W.J. Wells Co. men’s clothing store)

“President Hilger of the First National [Bank]….said several weeks ago the officials …had plans drawn for the construction of a new establishment to be erected on the corner of Fifth Avenue and Main Street …. taking the place of the antiquated buildings now occupied by the Lewistown Furniture Company, the Mountain States Telephone Company and the Stapleton Plumbing. In order to make it possible to put up such a building as the bank desires, we decided to interest if possible some other large business concern. [We] personally took up the matter with the Lewistown Electric and Power Company whom we were informed, had in mind erection of a building for its own use. It has been decided to put up a four-story structure, which will have a frontage of 90 feet on Main Street, extending to the alley with a frontage of 100 feet on Fifth Avenue. The building will be of reinforced concrete faced with brick and terra-cotta…the whole ground floor will be occupied by the bank and the electric company, the former to have the corner. The three upper floors will be made into handsome office rooms, special attention being given to ventilation and light.” (Fergus County Democrat February 11, 1913)

“So soon as the telephone company can get into its new exchange building the site will be cleared and work begun. It will be impossible to do more than get this $125,000 block under roof before snow flies and the finishing of the interior will be carried on through next winter.” (Fergus County Democrat, February 25, 1913)

“Bids for the construction of the joint building to be erected ……were opened last evening at the office of the architects. In addition to these bidders a large number of materials men interested in the matter were on hand and it looked as though a convention was being held in the light company’s offices.” (Fergus County Democrat, June 17, 1913)

“When the bricklayers and terra cotta men completed their work on the new bank electric building, the structure was admired by all, even though if looked at critically there seem to be some crudity in the appearance of the walls due to slight spatterings of mortar and a certain lack of uniformity in the coloring of the brick. How the latest wrinkle in treating such walls works out was illustrated in this building last week. First workman went over the walls, scrubbing them with a solution of greatly diluted muriatic acid. When the walls had dried out they went over them again with pure linseed oil. The result is really surprising. Every particle of dirt has disappeared and the walls present a rich uniform appearance, the coloring being deep and attractive.”  (Fergus County Democrat, April 28, 1914)

“There is much yet to be done before the apartments will be ready for use and when the bank is installed there it will have as convenient a home as any institution in the state.” (Fergus County Democrat, May 12, 1914).

“The First National Bank will occupy its new quarters about August 1. It will give its constantly growing list of customers every feature of up-to-date service.” (Fergus County Democrat June 11, 1914). 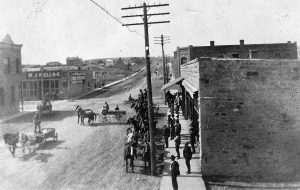 This photo shows Main Street at the corner of 5th Avenue, circa 1903. The Bank-Electric building replaced the building labeled “W.J. Wells” which was the Lewistown Furniture Store in 1912. 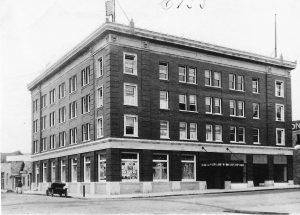 The Bank-Electric building on the corner of Main and 5th Avenue built in 1913-1914. Notice the electric flag on the top corner-it had flashing lights to make it look like the flag was waving.