The Imislund Building by Nancy Watts 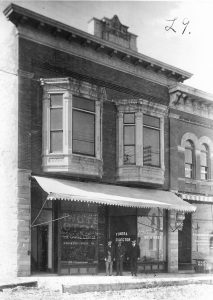 The Imislund Building located at 508 W. Main was built in 1906 by the Tubb Bros.

“Herbert P. Imislund was a prominent Lewistown businessman, city clerk and president of the Montana and Eastern Corporation, a large investment concern.” (Montana Historical and Architectural Survey by Ellen Sievert).

In 1906, “Mr. and Mrs. Imislund, who have been making their home at Grass Range for several years, have moved to this city and will make their future home here.” (Fergus County Democrat Apr 24, 1906).

“H.P. Imislund…purchased of Joseph Jackson, 30 feet on upper Main Street [508 W. Main], joining the new building being erected by the First National Bank Building (502 W. Main).” [Joseph Jackson had erected a home on this property in Aug 1884.] “It is the intention of Mr. Imislund to commence at once the erection of a two-story stone building on his recently acquired ground.” (Fergus County Democrat, May 1, 1906).

“Excavation for the business building which H. P. Imislund is building in the First National Bank block has begun…it will be a two-story stone with a brick front. (Fergus County Democrat, June 12, 1906).

“The Imislund building is rapidly nearing completion and presents one of the best fronts in the city. A fine marble floor is about to be laid…” (Fergus Co. Democrat, Nov 27, 1906)

“Imislund and Judd have purchased the large stock of wines and liquors of the firm of Poland and Robinson. The new firm has also secured the agency of the La Cross beer, which will be placed on the market. The bottling department will be discontinued for the present… Imislund and Judd will be located in the basement of the Imislund building.” (Fergus Co. Democrat, Dec 11, 1906)

“Sheriff-elect W. R. Woods has so far announced but two-appointments, H.P. Imislund who has been the city clerk for a year and a half, will assume the duties of under-sheriff and John Reed will be jailer.” (Fergus Co. Democrat, Dec.13, 1910).

“George R. Creel (funeral director, County Coroner, and licensed embalmer) was proprietor of the Lewistown Monument Co. in the Imislund Block before he moved his business to 603 W. Main in 1913. It also housed the Redman’s Hall.” (Montana Historical and Architectural Survey, Sievert).