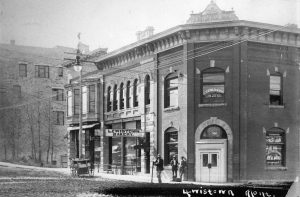 PHOTO CAPTION:
The McDonald and Charters building (built in 1905) is in the center of the photo where it says “Lewistown Bakery”. The Building on the right is the First National Bank (earlier called the Judith Basin Bank-built in 1899). The third building in the group is the Imislund Building, built in 1906 (behind the light pole). On the far left is the side of the Burke Hotel.

It was originally the home of the Lewistown Bakery (“Mother’s Bread, Our Specialty”) and C. E. Shoemaker & Co. (farm mortgage loans). The Knights of Pythias had their lodge on the second floor.

“George Wells has been awarded the contract for erecting the McDonald and Charters block, adjoining the First National Bank [earlier called the Judith Basin Bank], the stone work having been sublet to John Laux. Work on the foundation was commenced yesterday” (Fergus Co. Argus, Sep 26, 1905).

“McDonald and Charters are putting up a fine two-story business block adjoining the First National Bank corner. They will expend at least $15,000 on the building, which is to be of stone, with a front of Omaha pressed brick.” (Fergus Co Argus Dec 12, 1905).

“Charles McDonald has bought the bowling alleys now in the Majestic Saloon and will shortly remove them to the McDonald and Charters building… It is Mr. McDonald’s intention to put in two more alleys, making four in all. In addition, he will put in several billiard tables, and the whole basement of the building will be used by him as a billiard parlor and bowling alley.” (Fergus Co. Democrat Apr. 3, 1906).

“Mr. and Mrs. C.P. Newell entertained a large number of ladies and gentlemen at the new bowling alley in the McDonald and Charters building on Tuesday evening. Bowling, billiards and pool formed the diversion of the evening. Refreshments were served. About 150 were invited.” (Fergus Co. Argus, July 13, 1906).

“St. James Guild intend to serve meals at all hours in the McDonald and Charters building… during the four days of the carnival.” (Fergus Co. Argus Sept. 21, 1906).

“Charles McDonald has disposed of his interests in the bowling alley to C. P. Newell, for a consideration of $1,200. Mr. Newell will conduct the establishment in the future in the same first-class manner as it has been conducted in the past. Mr. McDonald will go in to the hay and grain business with John H. Charters in this city.” (Fergus Co. Democrat, Dec 4, 1906). “Mr. McDonald after spending so many years on the range, found the life indoors too confining for his taste.  (Fergus Co. Argus, Dec 7, 1906).

On Dec 7, 1906, The Lehman Bros. put a notice in the newspaper: “We have rented the handsome new structure known as the McDonald & Charters Building and will occupy it solely as a Furniture Department. To move our mammoth stock will be a stupendous undertaking; and for one month, ending Jan. 1, 1907 we will sell any or all of our furniture at practically FLAT COST. We have not the time or space to enumerate the various articles of furniture we carry so you had better call and see it for yourself.”

On Jan 31, 1911, the newspaper reported: “About six o’clock Thursday morning fire was discovered in the McDonald and Charters building on Main Street near 5th Ave. When the firemen arrived, the smoke was rolling out of the Lewistown Bakery and it was found impossible to get into the building where the fire originated.” The damage to the Knights of Pythias Lodge rooms was placed at $1500…Mr. E.G. Worden’s library had damages of $900, the Lewistown Bakery owned by K. C. Munroe had $4000-$5000 worth of damage, C.E. Shoemaker & Co had damaged furniture and “immense quantities of printed and lithographs stationery and office supplies at a loss of $1000.” The Lewistown Trades and Labor Council who occupied the basement of the building had $450 worth of damage. “The building was completely gutted, and it will take some time before the tenants will be able to again take possession.”

The building survived the fire and according to the 1912 Polk Directory, C.E. Shoemaker and the Knights of Pythias were back in the building.