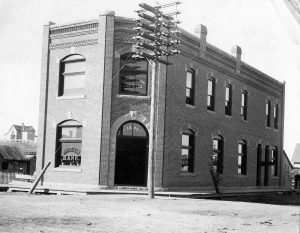 The Judith Basin Bank building at 502 W. Main (formerly the “Home Plate” and “Flaments”) was built in 1899 at the corner of Main Street and 5th Avenue North.

“Bricklaying was commenced on the new bank building Monday. The new institution will be known as the Judith Basin Bank.” (Fergus Co. Argus, Jan. 25, 1899).

“The Judith Basin Bank building will be completed this week and the bank will move about July 1,” and Cook and Hilger will move into the quarters built for them.” (Fergus Co. Argus, June 28, 1899).

“The interior has quite the appearance of a metropolitan bank …other quarters in the building will be occupied, the finest suite of rooms, that on Main Street to be occupied by Blackford and Blackford, attorneys.” (Fergus Co. Argus, July 5, 1899).

“The entire building is heated by the hot water system. The bank building and fixtures represent and investment of $12, 000, including the real estate. The upper floor is arranged for offices.” (1901 Pictorial Edition).

“Drs. Wilson and Lang now occupy their new office in the Judith Basin Bank building and are prepared to attend promptly the needs of the sick or injured.” (Fergus Co. Argus, July 5, 1899).

In 1904 the Judith Basin Bank was reorganized and called the First National Bank.

In 1906, an addition was added to the back of the building.  “The ground at the Fifth Avenue end of the First National bank building was cleared away today, and an addition, two stories high, will be put up there at once. This addition will provide additional rooms and the stairway, now in the center of the building, will be placed there. The banking establishment will then occupy the whole of the ground floor, including the offices now used by Attorney William A. Gordon Jr. With the stairway in the McDonald and Charters block, the bank building will have two stairways, one on Main Street and the other on the Fifth Avenue side.” (Fergus Co. Argus, July 10, 1906).