The Mackey Building by Nancy Watts 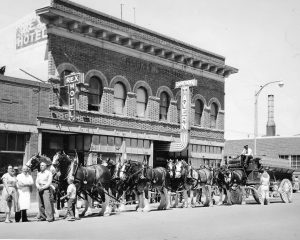 The Mackey Building (Montana Tavern) at 202 W. Main was owned by Thomas A. Mackey and cost $20,000 and was built with bricks from the Lewistown Brick and Tile Co.

“Plans are now being prepared by Wasmansdorff and Eastman for a two-story, 50 x90 business building at the corner of Second Avenue and Main Street. The building will cover Spring Creek where it crosses the north side of Main Street. It will be necessary to drive piling down in the bed of the creek, on which a cement foundation will be built.” (February 27, 1911 Fergus County Democrat).

“T.H. Mackey this morning let the contact for the erection of a fine, modern, two-story business block on his property on Main Street near Second Avenue to Frank Pierce. Work is to start immediately. The building will be of steel construction…the ground floor will be devoted to store purposes, while the upper floor will be cut into offices. The building is to be completed and ready for occupancy this year.” (May 16, 1911 Fergus County Democrat).

Things did not go as planned. In June of 1911 Mackey was sued by Thomas G. Heidahl over a contract dispute. In July, 1911 “City engineer McClean reported that the new Mackey building foundations were not being constructed in conformity and recommended that the work be stopped.” (July 11, 1911 Fergus County Democrat).

Finally in October, “an examination of the Mackey building had been made and that it was going up according to the specifications” (Oct. 3, 1911 Fergus County Democrat).

“The new Mackey building, erected over Spring Creek on Main Street is now almost completed and the tenants will be moving in very shortly.” (Nov. 7, 1911 Fergus County Democrat).

Photographers C.M. Branch (founder of the Empire Studio) and E. M. Holmboe “are now established in their rather luxurious quarters in the new Mackey building”. (Jan. 23, 1912 Fergus County Democrat). They called it the Rembrandt Studio.

On September 3, 1912, Ed Page caught a 34” trout under the Mackey Building that weighed 15 ½ pounds. It was mounted and placed at the Judith Club (Masonic Temple building).