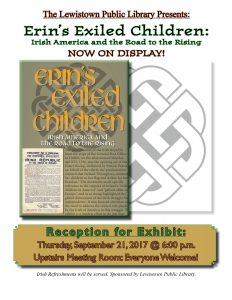 A display narrating the Irish struggle for independence and the support given by Ireland’s “exiled children in America,” will be available for viewing at the Lewistown Public Library at 701 West Main Street in Lewistown beginning Wednesday, September 6 .

“Erin’s Exiled Children: The Irish of America and the Making of Modern Ireland” was created in honor of the centennial of Ireland’s Easter Rising in 1916 and documents the Irish struggle for independence and the role the Irish in America played in keeping their traditions alive.

The University of Montana (UM), the Butte Silver-Bow Archives, the Ancient Order of Hibernians, the Friends of Irish Studies in the West, and The Gathering created the exhibit. Viewing is free and open to the public during normal library hours.

The Erin’s Exiled Children reception is Thursday, September 21 at 6pm in the library upstairs meeting room.  The event is free and open to the public.

New Podcast Episode – Campfire Tales In this episode of In the Stacks, we finally dive into some spooky campfire stories of wilderness legends, a haunted hotel, a sinister cat, and more, just in time…
View Calendar