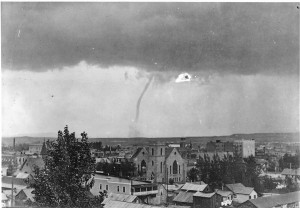 New to nonfiction:
The Long Shadow of Small Ghosts: Murder and Memory in an American City by Laura Tillman

The Hour of Land: A Personal Topography of America’s National Parks by Terry Tempest Williams

Valiant Ambition: George Washington, Benedict Arnold, and the Fate of the American Revolution by Nathaniel Philbrick

Montana Memory Project, by Nancy Watts
Lewistown, Montana. The above image is of a tornado which touched down in a field in 1916 at Brooks, Montana is in the background. The picture was taken from the Lincoln School and shows the Presbyterian Church (built in 1912 on the corner of Watson St. and 5th Avenue South) in the center. Just to the left of the trees in the foreground is the Presbyterian Church (built in 1892-93 and
torn down 1952) on the corner of Janeaux and 5th Avenue South. The tall buildings on the right are the Fergus Hotel and the back of the Judith Theater. Photo00499, Lewistown Public Library. For more historical photographs take a look at the Montana Memory Project at:
http://mtmemory.org/cdm/search/collection/p103401cmhp.