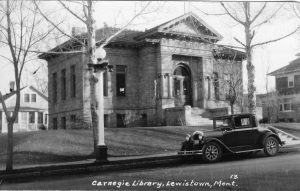 The Lewistown Public Library was built in 1905 by the Tubb Brothers (T.J. Tubb, architect). Using native sandstone, (the sandstone quarry was within a mile of Lewistown) it was built from a donation ($10,000) from Andrew Carnegie. The land was part of the Stafford Addition and bought from Mr. Stafford for $600. The library went through many troubled times. The furniture did not arrive on time and there was not enough money to heat the building since all of Mr. Carnegie’s money had been used to construct the building. Mrs. Pfaus, one of the first librarians, was allowed to live in the basement in lieu of her salary.

In 1959 the Busch Memorial addition was built on the 7th Avenue side of the library and the dedication for the building was in 1960. Dena Busch, wife of Ernest Busch, who lived near East Fork, willed $25,000 to the library. The addition was dedicated to Oscar Mueller (Mrs. Busch’s attorney), who was instrumental in asking Mrs. Busch to make a bequest to the library. The adult department was moved to the lower level and the upper level was remodeled so that the children’s department could move upstairs.

In 1990 the library was enlarged again. The expansion cost $441,000 (much of the money came from the coupon drive done by local citizens). Jeff Shelden of Prairie Wind Architecture designed the new addition and Don Bost Construction was the contractor.

“One of the surest indications of the growing intelligence of a new community is its manifest desire to have a public library, and the educational standards of an older town are judged by its support and use of this cultural agency.” (Mrs. M.E. Plassman)