Collapse of Modern Civilization by the Stereotypical Librarian 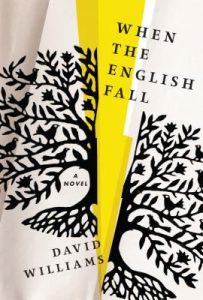 If you are looking for books that will make you think or if you already think things are getting pretty bad these books and movies will make you realize it’s not so bad after all.  Enjoy each moment of this brand new year.

When the English fall, David William’s debut novel is a thoroughly engrossing look into the closed world of the Amish, as well as a thought-provoking examination of “civilization”.  When a catastrophic solar storm brings about the collapse of modern civilization, an Amish community in Pennsylvania is caught up in the devastating aftermath. Once-bright skies are now dark. Planes have plummeted to the ground. The systems of modern life have crumbled. With their stocked larders and stores of supplies, the Amish are unaffected at first. But as the English (the Amish name for all non-Amish people) become more and more desperate, they begin to invade Amish farms, taking whatever they want and unleashing unthinkable violence on the peaceable community.
Seen through the diary of an Amish farmer named Jacob as he tries to protect his family and his way of life, When the English Fall examines the idea of peace in the face of deadly chaos: Should members of a nonviolent society defy their beliefs and take up arms to defend themselves? And if they don’t, can they survive?

The last Ballad by Wiley Cash is a novel based on a true story.  It’s 1929 and Ella May Wiggins is struggling to raise her 4 young children alone. She must work late into the night at the American Mill No. 2 in Bessemer City, North Carolina. With a sick daughter at home, Ella appeals to her boss to work the day shift, but her request is denied, leaving her angry and frustrated. After the first of the union leaflets come through the mill, Ella experiences the first glint of hope. With the singing voice of an angel, the courage to stand up to injustice, and a strong willed manner, she becomes the face and sound piece of the union movement. Inspired by actual events, this sweeping southern tale has the familiar tone and emotion like the film Norma Rae and of Ron Rash’s novel Serena.  After reading this one you might enjoy the movie Cinderella Man about the true story of Jim Braddock.  It shows the effect of the great depression of the 1930’s on the people in the northern cities.

The library recently acquired on DVD The Circle and Steve Jobs both excellent movies that might make you think different about the future.

After watching the movie (or before) you should read the book by Walter Isaacson titled Steve Jobs. Isaacson’s narrative style is engaging. Steve Jobs was a fascinating person whose powerful personality and extraordinary life make for a very compelling read. He revolutionized many different technological and entertainment industries by successfully blending technology and the liberal arts, giving consumers products they didn’t even know they wanted. He was able to defy reality by simply refusing to accept it (a phenomenon referred to as his “reality distortion field”), enabling him to do the impossible. On a personal level, Jobs was a very sensitive and emotional man, yet he was unable to empathize with the feelings of others, which, along with his “reality distortion field,” led to him act in unsavory ways towards people in both his personal and professional life.  But whether you love or hate him, it’s impossible to deny that he had a major impact on the world, or that he was an interesting person.

Add to your resolutions for 2018 to read more memoirs and stay away from series to make it a great year!