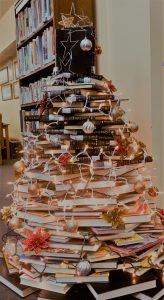 Book Series. Don’t you love a good series? I know I do. Authors that can masterfully craft a world so immense it takes book upon book to uncover each place, character, and idea are genius. Unfortunately, series are kind of the bane of a librarian’s existence. Let’s wander down the rabbit hole for just a second to explore why series can cause such a headache for a librarian. It is irritating but inevitable that at least one book from the hottest new series you just received will be missing in a few short months. In addition, missing books will continue to plague the series in your collection. And the conundrums continue to confound. The love of the author and series will drive patrons to your desk wanting/needing the next title only to be let down when they find out a year must elapse before their hunger will be satiated. Plus, the sheer number of series that patrons enjoy is enormous and keeping track of what is missing or new or a companion series is enough to burden the best spread sheet or librarian’s mad remembrance skills. Lastly, but for sure not leastly, vociferous authors will eat-away at your precious bookshelf space with their singular point of view and characters, shrinking your informational scope, a librarian’s nightmare. Nevertheless, I still love a good series. I love to read them, I love to share them with patrons and I love to see a patron’s excitement when the next/new book in a series comes to our shelves. Oh series, you have really complicated my life.

To circumvent this stressor, I have chosen humor. Series will continue to be what they are, and I will continue in my due-diligence to provide complete series and enthralling titles for our community. And to show acceptance, I offer this seasonal tribute to the series here in this library. Each series mentioned can be found in the youth section of our library and each series has the number of books in the series for the corresponding number in each verse. Happy singing.

On the first day in series land, my patron sought from me,

One Youth Librarian in a Pear Tree

On the twelfth day in series land, my patron sought from me,

Eight Heroes in Training a Milking

And One Youth Librarian in a Pear Tree ?