WAR DECLARED A HOT TOPIC BY PUBLISHERS by the Stereotypical Librarian 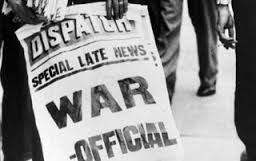 The Nightingale by Kristin Hannah has been on the best selling list for over 81 weeks and All the Light We Cannot See by Anthony Doerr has spent over 127 weeks there.  Both books are set in France during WWII.  Clearly the publishers are happy that war sells but why do we want to read about war?  Fiction wise I would say that WWII is the favorite war to read about, more books are published with their story set during that time period in history than any other.  Why?  To begin to understand the causes of WWII I suggest you watch a DVD the library has The First World War the complete series based on the book by Hew Strachan.  By November 1918 everyone was tired of fighting and about 38 million people were dead.  So, 21 years later the world decided to try it again?  After reading The Secret Rooms by Catherine Bailey and The Six: lives of the Mitford Sisters by Laura Thompson you might wonder how Britain managed to win either war.  Both are interesting reads and really gives you a sense of the upheaval the world was in before either war began.

Why are authors writing about war?  Maybe because the books are selling really well.  Why do we want to read about war?  I’m hoping it is because we are trying to find a peaceful solution to world problems by reading about a time when the world was at war.  Two good books that I’ve read and recommend are The Welsh Girl by Peter Ho Davies and The Turtle Catcher by Nicole Helget.  Read them and then let’s give peace a chance!