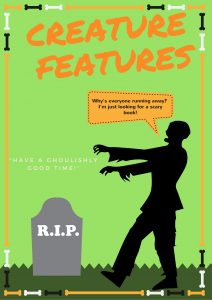 Boo! As the evening darkens into night, the legendary creatures that haunt our imaginations creep, slither, and crawl out of the shadows. These frightful beasts are very popular this time of year. And why not, the long days of summer are retreating into the chill of autumn and the world itself is preparing for a long silent winter sleep. Of course, our earthly imaginations would conjure some brilliantly creepy imagery for this in-between time. Thankfully we have plenty of literature to encourage our minds to wander into these dark spaces. Our youngest readers can enjoy light and humorous first encounters with these eerie creatures in Eve Bunting’s Scary, Scary Halloween and Lisa Bullard’s Trick-or-Treat on Milton Street. Princess Posey finds courage to face some spookey stuff in Princess Posy and the Monster Stew.

But if you are ready for a more spine-chilling read, master storyteller Neil Gaiman can take you on the magical and terrifying adventure of a young boy raised in and by the inhabitants of a graveyard in The Graveyard Book. Campfire Tales…Ghoulies, Ghosties, and Long-leggety Beasties by William Forgey offers even more hair-raising tales that he perfected as former scout leader. Joyce Sidman offers beautiful poems in Dark Emperor & Other Poems of the Night for those seeking less sinister creatures of the night. Our young adults have what seems like an overabundance of menacing creatures but I will turn to not a werewolf or vampire but a young princess whose ruthlessness is unparalleled. Kiersten White brings Lada Dragwlya to life in And I Darken.

Finally, no list of creepy creatures could be complete without mentioning Washington Irving’s classic The Legend of Sleepy Hollow with the forever creepy headless horseman. Particularly for me this classic will be forever remembered as the 1949 Disney cartoon version.

Books & Babies is for the infant and toddlers (0-2 years) and caregivers meet in the youth area to sing songs and nursery rhymes, read a story and play.  Books & Babies is a weekly…
View Calendar