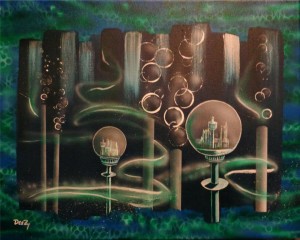 We’ve been punked! Well, steampunked that is. A couple of weeks ago the entire staff here at the LPL pitched in to help create an awesome display featuring this unique and interesting literary genre. Steampunk is described as a subgenre of science fiction and fantasy featuring advanced machines and other technology based on steam power of the 19th century and taking place in a recognizable historical period or a fantasy world.
For me, Steampunk reminds of me fall. Maybe it is the often used foggy London imagery or the Victorian images drenched in dark tones or maybe it’s the contrast of hot steam powering frigid, unyielding steel. This contrast being reminiscent of the clash of the titanic seasons Summer and Winter, meeting quietly in Autumn. It is true that this genre has been around for a while…do you remember “Wild Wild West” a 1999 movie with Kevin Kline, Will Smith, and Selma Hayek. This film fits nicely into this genre and was made 17 years ago (ummm…can it really be that long ago?). Luckily, authors and readers have remained interested in this distinctive literature and titles have continued to be published. A few notable youth titles include “The Invention of Hugo Cabret” by Brian Selznick, “The Leviathan Trilogy” by Scott Westerfeld, and “Airman” by Eoin Colfer. All of these books re-imagine the Victorian age with fantastic machines and cunning adventure. And don’t forget to check out our Steampunk display on your next visit to the library!