LPL is a Poke Stop! by Kari Albertson-Denison 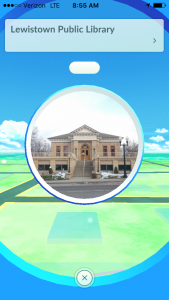 On an evening stroll up Main Street last week with my family, my son discovered the Lewistown Public Library is a Poke Stop! This was an exciting discovery and is a bonus for our public library.

Pokemon GO is the new game craze this summer and is based off the 1990’s Pokemon video game. Swarms of teenagers, youngsters and adults are engaging.
Pokemon GO is an interactive game played on an Android or iOS device connected to the internet. The player collects virtual treasure that are hidden at public places. Pokemon appear in the player’s real world surrounding through her device’s GPS system, camera and virtual reality technology. The player uses their device to locate ‘wild Pokemon’, throws Poke Balls to capture them and adds them to her Pokedex.
Once Pokemon are captured and trained, players locate Poke Stops to collect game elements and Poke Balls. Poke Stops are essential to the game. Pokemon GO progresses through stages and at stage 5 players can join a team to battle at Poke Gyms.
Now, if you need to collect Poke Balls to capture wild Pokeman, you know where to come. LPL is where it’s at!
(cutline, Pokemon photo-The Lewistown Public Library as it is represented on the Poke Go app that’s the new rage. )